A Complete Food Guide to Algarve: Where & What to Eat! 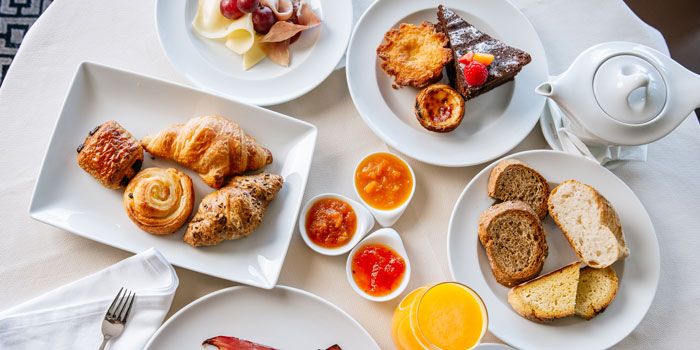 Seafood and other local delicacies that you can try in Algarve: a Food Guide you mustn't miss!

LOAD MORE
LOAD MORE
Portugal is unique as it is a country that is incredibly dependent on its strong flavors and variety of food. Influenced by the Mediterranean, Portuguese cuisine is most known for its seafood and special spices such as Piri Piri. Portuguese cuisine has been influential to the rest of the world, especially in Brazilian and Macanese cuisine. Although rich in international food from around the world, when staying in Portugal, eating Portuguese food is a MUST.

Algarve has it all. The amazing beaches, coves, whitewashed villages and traditional restaurants are just the beginning. Because of the excess amount of seafood, many meals and dishes are eaten with fish and seafood. In fact, Portugal has numerous unique ways to cook their seafood. Fish itself, can be cooked in multiple ways including grilled, boiled, fried, stewed, roasted or steamed. The list of delicious food goes on and on but we have compiled a list of our favorite "must-eats" and where the best restaurants are to find them!

There are plenty of restaurants for all taste buds in Algarve, including an impressive amount of Michelin starred restaurants like the Vila Joya and The Ocean. However, we would recommend eating at traditional restaurants to get an authentic taste of everything Algarve has to offer. Although you can never go wrong with seafood in Algarve, some of the classic Portuguese foods include: fresh catch of the day, sardines, piri piri chicken, soup, and cataplana! Some of the best food is found in hidden snack bars, rooftop restaurants, Michelin star restaurants, or food festivals!

Cod is the most common fish to eat in Algarve but other popular dishes include octopus, squid, lobster, shrimp, prawns, mackerel and mussels. A popular codfish dish is called "Pasteis de bacalhau" and roughly translates to codfish pastels. This dish is made from fried eggs, shredded codfish, onion and parsley.

They are mixed together and fried together, resulting in small oven pastels that can be served both hot or cold. Cod is also commonly just boiled with vegetables and potatoes as a side dish. "Bacalhau a Bras" is a dish that is made from fried potatoes, codfish, parsley and eggs mixed together as well.

Sardines are big in Portugal, as there is even an annual sardine festival in August! For grilled sardines, we recommend visiting the Boia at Salema. This is a cheap and happy-vibed cafe by the beach with fresh fish always served with hearty potatoes and refreshing salad. Grilled sardines are a traditional dish from Festa de Sao Joao do Porto, which is a festival celebrated every Portuguese summer.

It's not exactly clear where Piri Piri Chicken originated from, but Algarve is famous for it. Especially in the small town of Guia, there is even a piri-piri chicken festival that takes place every August. Piri Piri chicken is made from a marinated chicken that has ingredients like garlic, olive oil, salt, lemon juice and piri piri chilies, and is normally cooked over a coal BBQ or an oven. Typically, they are served with salad or rice and chips. Recently, piri piri chicken has grown in popularity thanks to chain restaurants like Nando's who have tried to imitate the wonderful flavors of Algarve.

Portugal's national dish is a simple soup called Caldo Verde, which is made from potato and kale, sometimes with bacon and sausage added to it. Typically it is seasoned with collard greens, olive oil and salt, and served with Portuguese corn bread for dipping. It is extremely popular for serving during celebrations such as weddings or birthday parties.

Cataplana refers to a clam shaped cooking pan made from copper as well as the food inside of it. This cooking utensil allows for ingredients to preserve their natural juices, aromas and flavors. The most popular version of cataplana is called "Ameijoas na Cataplana" which means "clams in the cataplana". It is basically a stew that is fish or seafood based with whatever other ingredients are found. Some popular versions of cataplana include a fish cataplana, seafood cataplana, fish and seafood cataplana,  and pork and clam cataplana. After being fried with herbs, it is topped with white wine and tomatoes, and served when a liquor forms.

We recommend a first visit to the backstreets of Quarteira where there is a hidden snack bar called Tico Tico. Arriving here early ensures you have the freshest catch and that there is still supply, as food here sells out quickly. There is no menu here, you simply choose from the seafood display at the front, from clams to octopus, and feel free to enjoy in this shack with the freshest flavors.

Restaurant with a View

If looking for a restaurant with a view, we recommend visiting the Hilltop Monchique. For a scenic drive up the hilltop village, try renting an ATV or a motorbike. Algarve classics are served here and the menu changes daily, from boar to rabbit.

There are plenty of food festivals taking place in Algarve. They are so popular that you will have to book your tickets within the respective months prior to them! In July, there is a beer festival (Alameda), and two seafood festivals (Festa de Ria Formosa and Olhao Festival do Marisco), while in October, there is a large festival called Feira de Santa Iria which has plenty of street vendors and Portuguese snacks.

How to spend a day at Aegina: the must dos!

Honeymoon in Santorini, the best choice for the most unforgettable journey of your life!

The Most Popular Koh Samui Beaches & What to Know before visiting

Weird and Strange Foods you will meet when travelling in Thailand.

5 Reasons You Should Add Dubai on Your Bucket List

Your Simple Guide to Exploring Australia!

Meet the best Luxury Resort in the Caribbean to Escape your daily routine!

A Fun Itinerary for Your Trip to the Sunshine Coast!

Written By:
Diana Smith
Get the best rates directly from the Hotel
Hotels for All Travellers
Recommend a Hotel for this Collection
- or -
Click Here to register your own Property
Have a hotel in mind that would fit in this list? Send us your recommendation using the below form.
User Login
Don't have an account yet? Click Here to Register
Forgot your password