A Luxury Eco-Friendly Villa in Syros becomes our favorite hot spot on the island! 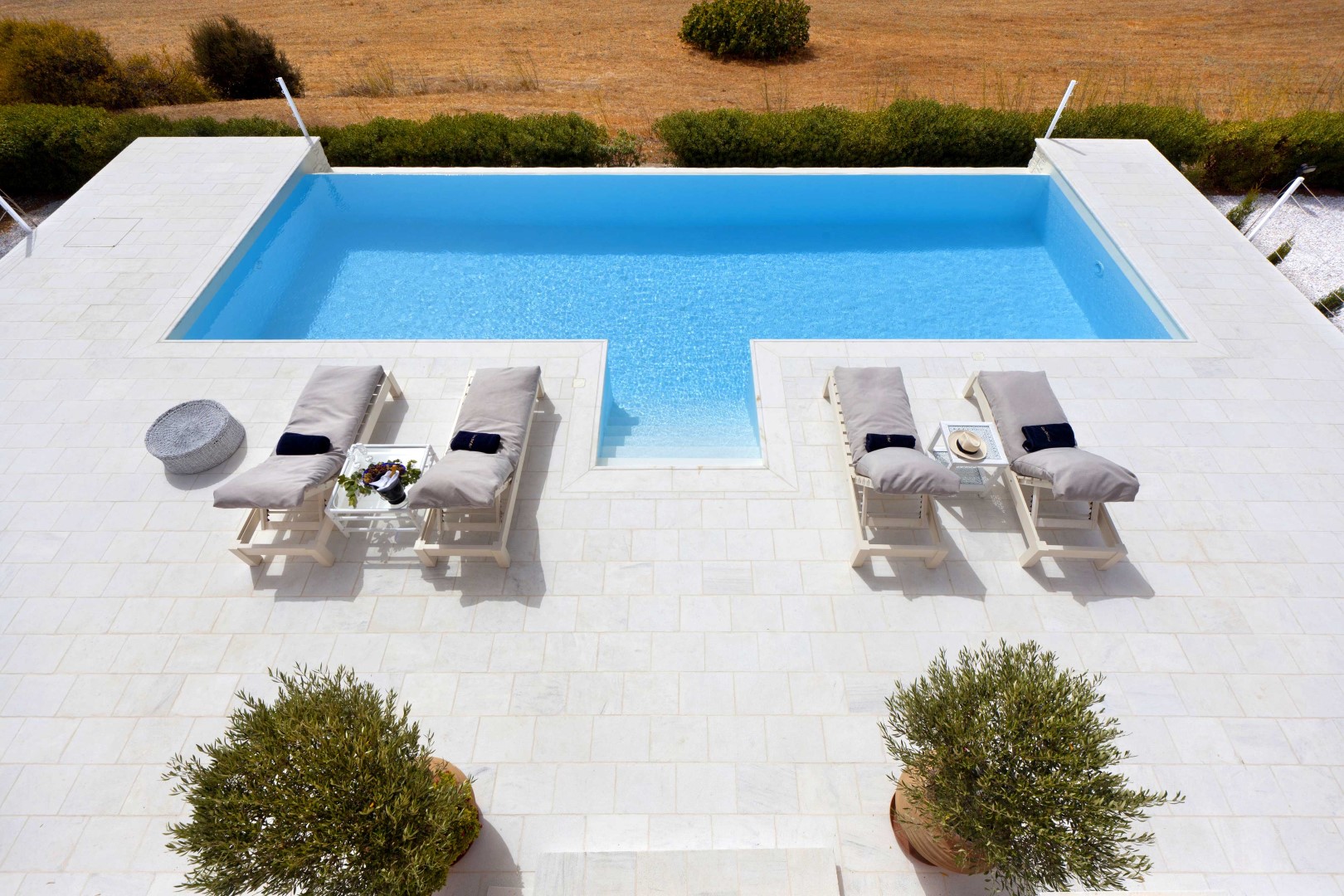 Also called the queen of the Aegean, Syros seduces thousands of travelers every year with its enchanting beaches and stunning landscapes!

Beach villas with 5-star facilities around the world

Beach villas with 5-star facilities around the world

At the heart of the worldwide famous island group of the Cyclades, lies the stunning island of Syros, known for its dynamic character, cosmopolitan nature, as well as all-year-seasonality. There are many stories unfolding in Syros Island, and all of them follow their own unique tempo.

The island of the 4 seasons does not 'know' seasonality, and it is the perfect host for couples, solo travelers, and friends all-year-round. Its main chora, Ermoupolis, is the home of 13,000 thousands of people, while Syros is rumored to be the ideal island to visit if you want to experience authentic Greek hospitality and culture.

Syros is the home of a wide range of hotels and resorts, including from budget-friendly options to more luxurious ones. All of the hotels follow the typical Cycladic style, hosted in white-washed buildings with traditional blue/yellow/grey windows and stunning views over the Mediterranean Sea.

Among the many hotels and resorts on the island, there is one that stands out from the others. Truly, Casa Del Sol Villa is currently one of the top hotels on the island, standing out for its traditional architecture and luxurious amenities.

Staying in a traditional and luxurious villa in the countryside!

With enough space to host up to 6 guests and a colorful garden of 4,500 sqm., Casa del Sol Villa ensures a premium experience for all types of travelers, from couples to families, or even double-dating couples.

The villa follows the typical Cycladic architecture and it offers panoramic sunset views, which you can enjoy from the comfort of your own private terrace. Its huge and colorful garden offers a diversity of raw fruits and herbs, like palm, olive, almond, pear, lemon, fig and apricot trees. It's also the home of a vineyard, as well as lavender flowers!

All of the above delicious ingredients can become the basis of various local recipes, which you can cook at your fully equipped kitchenette. Your daily breakfast will include a wide diversity of homemade recipes and delicacies, including homemade marmalade, thyme honey, Greek yogurt, Greek coffee, loukoumia, olive oil, fresh eggs, oats etc.

An Eco-Friendly Villa guides us through Syros!

Being the home of 29 settlements and more than 18 beaches, Syros will keep you busy for at least a week —if you plan to thoroughly explore it. Villa Casa del Sol is conveniently located in a beautiful village in the center of Syros, called Mesaria.

Mesaria is very close to Syros' capital, Ermoupolis, and it enjoys marvelous views over the island's mainland as well as the Mediterranean Sea. It is actually the perfect village to stay if you want to fully explore Syros with ease.

Some great beaches nearby the villa are:

Azolimnos Beach (10 minutes by car - Get directions from the hotel): Azolimnos is the closest beach to Syros' capital, offering marvelous views over the islands of Tinos, Mykonos and the small islet Lefko. The beach is organised with sunbeds and umbrellas, while it can be easily accessed either by car or bus!

Agathopes Beach (15 minutes by car - Get directions from the hotel): Being one of Syros' most popular beaches, Agathopes gets pretty crowded every summer. Its golden sand and shallow waters has made it a favorite for both families and couples. Every spring, the beach is packed with Monachus-Monachus seals, so it becomes the main attraction on the island!

Achladi Beach (13 minutes by car - Get directions from the hotel): This is definitely the best choice for families with young children and those who are in search for a place to relax. It features calm and safe waters for the younger ones to swim, as well as all kinds of sports and diving facilities for the lovers of extreme sports.

Aetos Beach (30 minutes by car - Get directions from the hotel): This is the furthest beach from the villa, being about 30 minutes driving by car. The beach is nestled on a small bay, featuring turquoise waters and golden sand. It can be reached either by boat from Kini or by taking the hiking path from Barbarousa.

Syros Cuisine: A journey of flavors!

Syros' cuisine has been influenced by many cultures. The refuges of Chios and Asia had the largest impact on the island's cuisine, since they introduced to the island Turkish sweets and delicacies. Some of the most popular traditional recipes from Syros are: Aetopita, karabola, lachanodolma with raisings, marathopita and more. For dessert, you should try pastelaries (salty figs) and loukoumia (often served with Greek coffee)

When staying in Casa del Sol Villa, you will be honored — yes, it's truly an honor — to try a delicious Greek breakfast that cannot compare to the Intercontinental breakfast offered in the common hotels. Of course, don't forget that you can also cook at the villa, since it's fully equipped with all of the kitchen essentials.

Among its other distinguishing aspects, Syros, is also famous for its abundance of sightseeing attractions and historical landmarks, ranging from luxurious mansions of the past aristocratic community to glorious Catholic churches and museums.

The Aquarium in Kini (11 minutes by car): Being a popular attraction for both children and adults, the aquarium in Kini reveals the magical marine world of the Aegean Sea through a wide diversity of sea activities. Moreover, you will get to admire traditional fishing boats, old fishing gear and marine organisms.

Theater Apollon (15 minutes by car):  For many, Theater Apollon is the proof of the cultural development of Ermoupolis. It was first built in 1864 but suffered major damage during the 2nd world war. Its rebuilding started in 1970 and was concluded in 2000. It has hosted numerous cultural events and festival since its opening in 2002

Pesthouse (11 minutes by car): The Pesthouse has had a huge impact on the island's history, while it has been used for many reasons throughout the years. It started as a quarantine facility for travelers who visited the island (in order to avoid disease spreading), while it was later used as a lunatic asylum for the political prisoners.

Agia Pakou (11 minutes by car): This is the most picturesque chapel in Syros, located on top of the Hill of Galissas. It offers stunning views over the blue Aegean Sea as well as breathtaking sunset views. Even though it's not easily accessible, the view will surely award you!

These are only three of the reasons why Syros Island will charm you and make you revisit it in the near future. You can start your journey by  booking your accommodation here!

Pattaya shows off a hot gay scene, like most of the Thai Destinations

Haute Living in Greece: a world of luxury awaits you

How to spend a spa weekend in Algarve!

An Adults-Only Experience for couples in one of the most beautiful islands in Greece!

The best Destinations for couples who love Food and Wine!

A traditional Sri Lankan Gay Wedding on the premises of a luxury hotel!