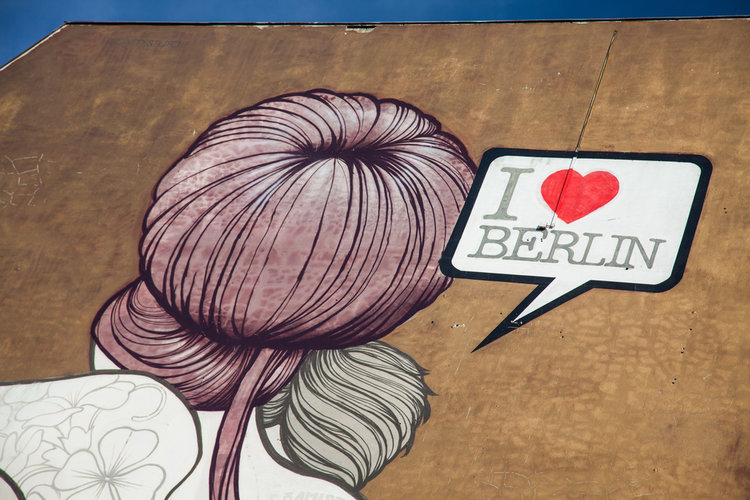 Berlin is famous for its graffiti art, as it is considered the European city with a “strong culture when it comes to visual street art”.

Anyone staying close to the city center, especially near the area of Friedrichshain, can admire the creativity that defines and adds to the unique character of this European city. Artists from all over the world, have become popular by their graffiti and works of art, throughout the streets of Berlin.

We present you some well-known street art, found in the German capital:

Remnants of the former Berlin Wall with graffities and paintings (here of Barack Obama)  in the Friedrichshain district of Berlin.

"Test the Best"by Birgit Kinder, Berlin Wall in the East Side Gallery, strolling down Mühlenstraße.

Part of the East Side Gallery graffiti of the author Dimitry Vrubel representing the kiss between Brezhnev and Honecker.

Street art in Berlin at the Teufelsberg.

Murals on buildings painted by artist Sky, at the western end of the Oberbaum Bridge in Kreuzberg.

Robot life street art by unknown artist, on the wall of a popular outdoor cafe.

Street art in Berlin at the Teufelsberg.

Berlin Wall located on the East Side Gallery.

Pack your camera,  book your hotel in Berlin, and go on a street art-tour of the city, in order to experience the urban art scene of one of the most historically important European capitals!

Bangkok by night! Explore the the city’s nightlife through these fascinating photos!

5 Stunning Off the Beaten Track Places to Visit in Portugal

Cairns - the most beloved gay town of Australia

Written By:
Peter Minkoff
Get the best rates directly from the Hotel
Hotels for All Travellers
Recommend a Hotel for this Collection
- or -
Click Here to register your own Property
Have a hotel in mind that would fit in this list? Send us your recommendation using the below form.
User Login
Don't have an account yet? Click Here to Register
Forgot your password