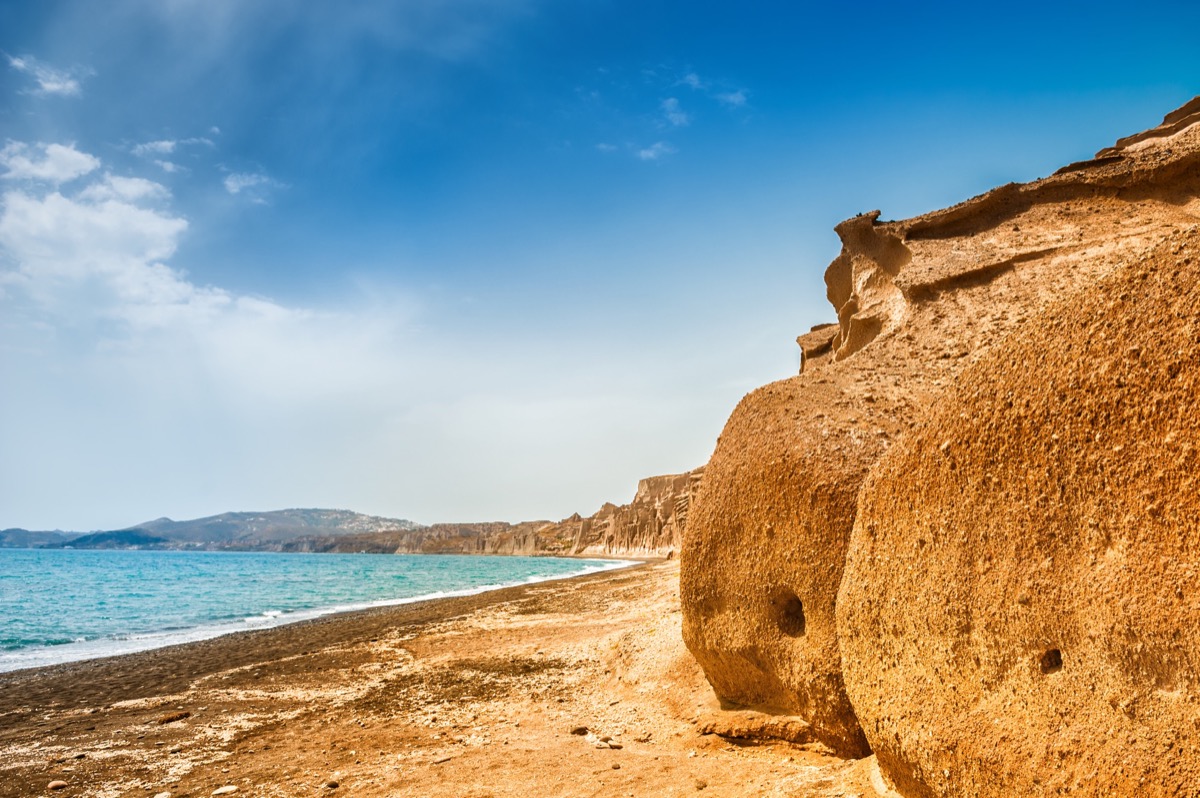 Discover the best gay beaches around the Greek islands and cities!

The Best Gay Beaches in Greece!

Greece is characterized by its mild Mediterranean climate, spectacular sceneries and stunning beaches. What's better than enjoying these amazing features of Greece surrounded by sexy Greek men (and not only)? The Gay beaches in Greece have been a major meeting point for the gay travelers and locals for many years, therefore, it is very easy to find a gay friendly beach even at the most isolated islands or regions!

Here are some widely known Greek islands and the most popular gay beaches on them:

Elia Beach is surely the most popular gay beach in Greece, dominating various charts as the best gay beach in the world. The majority of the LGBT audience is gathered at the right side of the beach as you look at the sea, which is also a nudist area. For a more naughty adventure, you should visit the rocks at the end of the beach!

Even though the days when Super Paradise was a major meeting point for the gay community are long gone, it is still considered a must-visit beach. Nowadays, it is mostly a mixed beach, attracting large amounts of people, especially during high seasons. Nevertheless, the gay acceptance is very high and there are several amazing gay events happening around the area.

Agia Marina is a semi-nudist beach which attracts many gay people. It used to be an exclusively nudist beach, but nowadays the nudist part starts after the end of the umbrellas. Pack your beach essentials and spend endless hours of fun with a handful of sexy Greek men or visiting tourists, under the hot sun!

Vouliagmeni is a stunning sandy beach with crystal blue waters that will make you forget you are in a city! It is situated only 23 km from the city center and is surrounded by several restaurants and cafes. The gay acceptance is really high and you are surely going to meet some gay visitors or gay couples, even though the majority of its visitors are straight. Limanakia B beach is also situated in the area of Vouliagmeni and it attracts only gay people. The swimming conditions are not great and there isn't any sand, but the waters are amazing!

See the best hotels for Gay Traveller in Athens >>

Situated at the south side of Santorini, Vlychada Beach is one of the most unique and beautiful beaches of the Greek islands. The highly organized beach on the right is called "Theros" and it features a club as well as many sports. The left side is more peaceful and alternative, and for this reason, it is chosen by many naturists.

Komos is a Paradise-like sandy beach, quite well-known, situated near Matala and more particularly near a village called "Pitsidia". The majority of the gay travelers and locals gather at the nudist part of the beach, which is said to be the best in the island! Other amazing gay beaches that you should definitely visit in Crete include Sarantari Beach, Kavros beach, Ammoudaki and Macherida.

Lalaria is situated at the northern tip of the island and it can only be reached by boat. It is an enchanting pebbled beach with deep blue waters and a breathtaking rocky setting which makes it much beloved by the travelers who seek adventure. Due to its isolated location, it has managed to preserve its wild beauty without showing any signs of human intervention. Other excellent beaches which are particularly popular to the gay audience in Skiathos include Koukounaries and Mikri Banana (Little Banana).

Acharavi Beach is a long, non-organized sandy beach situated near the region of Acharavi. It has stunning crystal blue waters and it offers excellent swimming conditions. It is one of the most popular beaches in the island, therefore, it can get really crowded, especially during high seasons. It surely isn't a gay beach but you are going to meet several gay people. If you don't like the huge crowds then you should definitely visit Myrtiotissa, a partly nudist unspoiled beach.

Langeri is a nudist beach situated at the north part of Paros, in Ormos Naousis. Many include it among the most beautiful beaches in the Cyclades, and you will understand why from the moment you set foot on the beach! The majority of the gay men gather at the southern end of Langeri, which is considered the gay part of the beach. Other popular gay beaches in the island are Kalami & Monasteri.

Faliraki is the only organized nudist beach on the island, providing its guests with all the necessary beach facilities. It is a combination of pebble and sandy beach and its surroundings consist of rocks which give it a wilder feel. "Mantomata" is situated at the end of Faliraki Resort, and it's the main region for naturism. You are going to find several gay couples and single guys sunbathing, scattered around the beach. Other popular stunning beaches in Rhodes include Kato Petres and Kallithea Nudist Beach.

Mylopotas is the most popular beach in the island of Ios, frequently included in the charts for the most beautiful beaches in Greek islands. It is an organized beach with golden sand and crystal blue waters that also offers superb swimming conditions. Meeting gay people is only natural due to the large amount of people it gathers. If you don't like big crowds, you could easily find an isolated spot near the beach or visit one of the several secluded beaches of the island.

See the best hotels for gay travellers in Greece >>

A Gay Guide to Milan: The capital of Handsome Men & Fashion

5 Destinations Every Foodie Should Visit in 2019

Gay Beach Wedding Playa del Carmen: How to make it worth it!

Wellness in Aosta Valley: Things to do to find your Inner Peace!