How to build a Spectacular Photo Story in Rome! 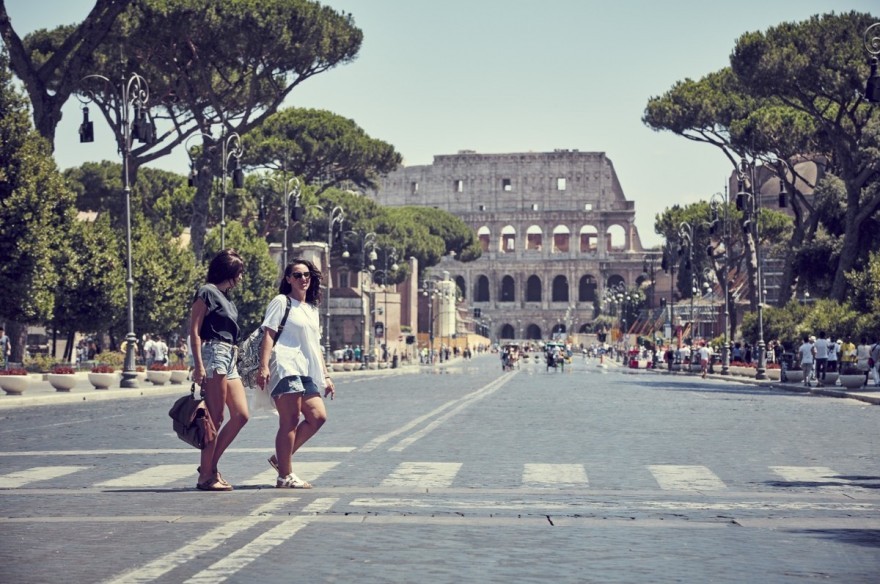 Read some tips & tricks to optimize your photography skills and tell your story in pictures!

A true traveler always makes sure to capture his memories. A photo, is not just an image representing a place. That jpeg file - or polaroid piece of paper, for our funkier readers - contains a rail of thoughts, feelings, smells, all reminiscing of a beautiful adventure of the past. Especially if this adventure took place in Rome. The capital of Italy is a city that will immerse you in its charm. It’s really a pity that you visit this historical place, and not take advantage of its tremendous cobblestone streets, scenic views and stunning buildings, to build the most spectacular photo collection you’ve ever achieved! Continue reading and let us give you some of our best tips on how to create your own photo story in Rome!

1. Find a perfect spot or multiple ones to capture the way the city looks under sunlight, letting the most iconic buildings to stand out and forever emitting the feeling of awe you had when gazing at this spectacular view.

2. Don’t forget symmetry, either taking a photo of yourself eating gelato in the scenic alleys or of the statement landmarks of Rome, following the basic symmetrical guidelines will instantly make you images look better.

3. Lighting is the key! Far more important than gear and equipment, a photographer -amateur or professional- must always consider in which angle the focal point of an image is lit the best.

4. Landmarks in Rome, like in most signature cities, are usually filled with crowds, making it difficult to create a clear and beautiful image of. You can play this card two ways. Pick on focal point, for example yourself enjoying the view of a place, making sure that the view along with the crowd is blurry. Now you have capture how the Spanish Steps look and feel, yet without the chaos of tourists -almost like excluding all noises and bringing up the magic of the place.

5. We like to suggest our travelers to not spend too much energy on the buildings, museums and other tourist attractions. Focus on the experience of your trip, and to capture that make yourself the protagonist. Your image heading to Castel Sant'Angelo, is a photo that actually tells a story!

6. Be playful! Traveling is fun and we let ourselves relax and reload, but when taking a picture most of people stand still in a static and dull pose. Changing your mindset about that will be life changing! Picking the camera on times when your friend is being silly enjoying herself rather than only when standing next to a landmark. Now you have a photo that will make you smile looking back at that morning at Fontana Di Trevi.

7. Details! Our brains are stimulated to remember happenings by bringing up particular details and then expanding to the whole picture. Zoom in on the hand of the statue, which looked so lively holding a papyrus. Take a photo of that gorgeous alley by focusing on the flowers growing in between the cobblestone.

8. Italian cuisine is considered one of the best in this world, so visiting Rome acquires exploring various tastes and recipes. What a better way to bring up those flavors, than shooting before devouring! #foodlover

9. Tell the story of the urban aspect of Rome with some street photography. An old man enjoying his espresso, a little girl playing at the part, an artist playing his music for some pocket money or any other personality you noticed while roaming around the city.

10. In the shadow of the Italian Colony, but still there, the hotel you choose is an experience on its own we often forget, as your camera only leaves your backpack after you are out of Splendide Royal. So, this time remember to shoot some pictures there too! Check out some of the iconic hotels in Rome, to start your photo story tomorrow!

P.S. Photo Credit: most pictures used are masterminded and taken by Christos Drazos.

Lana Arris, a passionate art and fashion lover, comes to present top travel tips and must-visit destinations around the world!

How to build a Spectacular Photo Story in Rome!

How to Spot the best Luxury Hotels in Santorini

Gay Life in Coimbra is Discreet but still Amazing!

Discovering New Zealand: Campervan Essentials for Life on the Road

Planning the Most Amazing Sports Road Trip Across the USA

Written By:
Craig Evans
Get the best rates directly from the Hotel
Hotels for All Travellers
Recommend a Hotel for this Collection
- or -
Click Here to register your own Property
Have a hotel in mind that would fit in this list? Send us your recommendation using the below form.
User Login
Don't have an account yet? Click Here to Register
Forgot your password